Five years ago today, September 10, 2001, I came home from the hospital following a scheduled hysterectomy. I was under strict orders to rest and take care of myself.

My mother was to fly in from Hawaii the next morning. She was coming for the month to help take care of my family while I babied myself on the couch with trashy paperback novels and Sees candies.

Kristin, a plane just crashed into the WTC. I don't think your mother is going to be able to come.

It was my father, and I remember wondering how this could be a problem. I assumed it was a small private plane.

I turned on the TV just in time to see the second plane hit.

I ran screaming for Hugh to get out of the shower.

Like the rest of the world, we sat that day, and for many days after, in front of our television. We called our loved ones. We made lists and plans to try and keep our family safe. I couldn't bear for any of us not to be together. We moved as a pack.

I knew some people who were killed that day. Not well, but I knew them. There was the boy who was a broker for Merrill Lynch and who represented one of the worst dates of my life. There was a man, a friend of a friend of mine... a man who had found out only the day before that his wife was pregnant with twins. His last call was to my friend's brother asking him to watch out for his family. There was the fireman, an aquaintance's husband, trapped on the roof of the Marriott. Hugh had worked with a woman on American Airlines Flight 11. The plane which struck the North Tower.

It haunts me to this day. To think of the phone calls made to say, "I love you". To think of people jumping off roofs, saving others before themselves, seeing a plane headed for their office. Haunts me.

Like everyone else I put a flag on my car. I donated to the Red Cross. I applauded Giuliani. I worried about Bush. I prayed that our government could help reestablish our feeling of safety and security. That somehow things would be ok.

That October I flew to New York. I wanted to see for myself just what had happened. How naked the city looked without the Towers, symbols from my childhood when my father was a young attorney on the 71st floor of the North Tower, to anchor it in place. As the plane took off the Captain came on the intercom. He thanked us for our faith in flying with him today and proceed to tell us what to do, as a group, if we saw someone rushing the cockpit. We were to trip the assailant and cover him with a blanket and pound on him, with our shoes, our handbags, our laptops, until he was subdued. Then we were to take turns sitting on him, 2 or 3 at a time, until the plane safely landed.

As we approached La Guardia we flew up the island. It was a perfect fall day. The sky was so clear you could see details in the homes, the brilliant burst of color of autumn leaves, the deep blue of the water... and the perfect stream of smoke. Thick, dark, cloying, smoke, pouring forth from the what we knew was a wound that ran stories deep.

The plane was silent. One of the flight attendants began to cry. And someone else began to pray. And the business man next to me kindly took my hand as tears began to leak down my face.

We heard the stories of the many near misses. Like our friend, Phillip, who decided to stay another day in Boston and therefore missed his scheduled seat on United's Flight 175.

Our life would eventually regain some semblance of what is the new normal.

For the family and friends of Clarin Shellie Schwartz, life would never be normal again.

Clarin was only 51 on the day the terrorists flew a plane into the South Tower of the World Trade Center. As Senior VP for the Aon Corporation, an insurance group where she headed up the acquistion and merger department, it was only natural that her days would start early and that at 9:03 am she would be hard at work behind her desk. The Aon Group occupied the 98th - 105th floors of the second tower. Above the impact zone of United Flight 175.

Clarin was trapped. Unable to get down past the smoke and the flames and the fireball which quickly overtook her building.

Clarin was willing to listen. Really listen. No looking over your shoulder or glancing at her watch, even when she was going through trying times herself.

I can't help but think that, on that last day, in those final moments of confusion and chaos and fear, that Clarin stood as a calm presence with those around her. And I can't help but realize what a special woman the world lost that day. A loss that can never be made whole.

Please take time today to remember not only Clarin but also all the other victims of September 11, 2001.

Take the time to say a prayer of peace for our world. 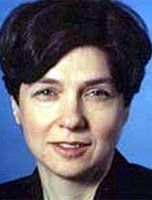 * Thank you for the 2996 for organizing this tribute. Without you I would not have had the opportunity to be touched by this lovely woman. I encourage you to follow the link and read more.
Posted by Kristin at 10:32 AM

You made me cry with your vivid descriptions - something we should never forget.

It is amazing how much it changed me by participating. I am trying to read as many of them as I can. we certainly lost some beautiful souls that day.

I invite you to read about Major Dwayne Williams who died at the Pentagon.

Beautiful post. I am going to try and read as many of these tributes as I can.

That's a profound recollection of your experience, Kristin, and an honorable tribute.

Another beautiful tribute! Thank you.

I have to admit, these are getting harder to read as so MUCH loss such REAL loss is laid open.

It's easy to understand numbers but, again, seeing the true faces of such senseless loss rips the scab off again.

IT is amazing getting to know all of these men and women. I knew so many wonderful people who died that day, and yet, so many more I never crossed paths with.

Really beautiful. Thanks for taking the time to comment at my tribute too. This was very moving and I'm glad you were a part of the project.

Am not sure if I have the strength to tackle such a task, it just hits so close to home but I am thinking about it - just can't figure out what to do.

I will never forget that day - I did not know anybody who died in the tragedy, but the loss of security (or at least a semblence of it), along with the sadness, distress, and chaos still scars me. It feels so surreal to this day.

i am bawling.. and naseaus. all at the same time. you are beautiful.. thank you for posting preshy face. my tribute is up

Thank you for posting your thoughts and feelings along with your beautiful tribute. My tribute post for Gilbert, who also worked for Aon, is up. Please stop by and leave a link so that all can come here to read.

Kristin, that was a moving and beautiful tribute to a person you didn't even know. The whole post was touching. Let's hope we never forget those who lost their lives that day.

I remember, and I'm saying that prayer.

This day is always weird for us. On September 10th we flew out of FL through LAX to Hawaii to get married. We were very fortunate. We were very lucky. We arrived safely in Maui, wandered around, went to bed and woke up September 11th, after it happened. I called home to brag to a friend, when she told me what happened. It was very scary for us as it was for everyone, but we were so far from home. We watched the replays on TV as we tried to continue with our wedding. It was just us and another two friends. We got married September 12th. September 12th of course is a wonderous day, but ALWAYS our anniversary is marked by this tragedy and it was always on our minds as we went forward with our plans in a fog. And getting on a plane 4 days after it happened with MAJOR military in our airports sporting m16's is a site forever burned in us. It's all very surreal for us, b/c we watched it, not live, but replay after replay, so far from everyone we loved. It was such a scary time in our history, forever changing the makeup of our country. So thank you Kristen for this tribute.

Wonderful tribute, Kristin... I am teary-eyed.
Mine's up, too.

What a beautiful tribute and very eloquent description of your personal experience that day. Thank you for stopping by mine and for your kind words.

Wow, I am very moved. Thank you for doing this.

What a lovely tribute. The personal touch you added to it made it especially moving to read. I was honored to remember Pedro Francisco Checo.

Beautiful tribute, Kristin. She sounds like a person I would have liked!

Thanks for stopping by, but the comment you left is anon. Please stop back and add a link.:)

Wonderful, wonderful tribute. Thanks to your efforts, she will live on in each of our memories.

I'm proud beyond words to be a part of the 2996 blogger family.

A very touching post. May we never forget the victims!

Every one of these tributes that I read make me cry, in spite of the fact that I don't know any of them personally. Thanks for being a part of this! I wish I had done it.

I was also assigned to remember Clarin.

This is a beautiful tribute. Thank you.

Stop by and visit her other tribute.

What an amazing tribute!

I too had been released from the hospital on September 10 after having my hestirectomy on the 7th. I slept on the couch that night of the 10th, with the TV left on. I awoke to see the WTC on fire and thinking wow what a movie, only moments later to see that second plane.

Your tribute is amazing. Thank you. My tribute to Laura Lee Morabito is posted at my site.

That was beautiful Kristin

Thanks for stopping by my post and thanks for writing this wonderful remembrance. It is very moving.

Thank you for your beatiful tribute that brought tears to my eyes. A wonderful lady that now had a face and heart to her name.

We will never forget.

What a beautiful tribute...Thank you.

I don't think any of us will ever forget - Stephanie @ www.forksandchopsticks.blogspot.com

Thank you, Kristin. You did what I couldn't. You did right by Clarin. I can honestly see her.

Clarin has such a kind face. Thank you for telling us her story and helping to keep her memory alive.

We must never forget. Thank you for a great post.

superb, terrific, bless you for your words here and for your caring. I am proud to join in honoring the 2996!
Life is more precious when we realize it could be snatched away. I think i will go hug my daughter!

We must never forget.

Heartbreakingly beautiful Kristin. I hung on every word.

Kristin
What You're Dying to Know